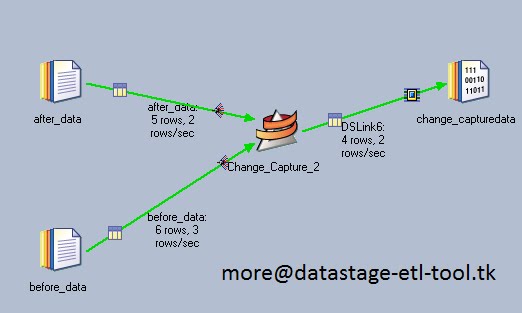 Change Capture Stage or Change Data Capture stage or CDC is used to capture the changes between the after_Data and before_data. Read and load the data in two files as below In Change Capture Stage Select Key column as e_id
and value column as e_add. Because e_add is the column we are going to update.

When
When compiling a job
Causes and resolutions


Specify all the input fields with length, in my case I had to use SQL Type= Varchar and their length. THis would work so long as it conforms to the LRECL setting.


81011 means that the host name is not valid or the server is not responding.
Do an exact search on 81011, you will find many discussions around it.

The full text for this “parallel startup failed” error provides some additional information about possible causes:

This is usually due to a configuration error, such as not having the Orchestrate install directory properly mounted on all nodes, rsh permissions not correctly set (via /etc/hosts.equiv or .rhosts), or running from a directory that is not mounted on all nodes. Look for error messages in the preceding output.

However, in the case where all nodes are running on a single server machine, the “Parallel startup failed” message is usually an indication that the fastname defined in the configuration file does not match the name output by the server’s “hostname” command.

In a typical node configuration file, the server name where each node runs is indicated by the fastname, i.e., /opt/IBM/InformationServer/Server/Configurations/default.apt:

Login to the DataStage server machine and at the operating system command prompt, enter command:
hostname

If the hostname output EXACTLY matches the fastname defined for local nodes, then the job will run correctly on that server. However, if the “hostname” command outputs the hostname in a different format (such as with domain name appended) then the names defined for fastname will be considered remote nodes and a failed attempt will be made to access the node via rsh/ssh.

Using the above example, if the hostname output was server1.mydomain.com then prior to the “Parallel startup failed” error in job log you will likely see the following error:

The above problem will occur even if your /etc/hosts file maps server1 and server1.mydomain.com to the same address since it is not the inability to resolve either address that causes this issue, but rather that the fastname in node configuration file does not exactly match the system hostname (or value of APT_PM_CONDUCTOR_NODE if defined).

You have several options to deal with this situation:

Changing hostname in a running system is not easy.


If you need to change the server name where we have installed the complete IIS8 suite of product (DataStage, QualityStage, Information Analyzer, etc)


change in hostname in /etc/hosts will not work. you must modify the Information Services Framework configuration, XMETA repository, and WebSphere Application Server configuration to recongnize the new host. So, any wrong modification on one of these configurations, then you probably are going to spend more than 1 week to debug the problem.


The better choice and one that surely works is to reinstall the product.

In order to find the alphabetic records in the column, we have a Alpha Function.

By using Alpha Function, we can find the number of alphabetic records we have in the required column.

Take Job Design as below


If we have a table as below

Read and Load the data in the Sequential file

In Filter Stage— In Where Clause

Compile and Run the Job to get required Output.

– The process by which data is extracted from the data source

Most of the current warehouse systems use the ETL methodology. Some emphasis has been placed on switching to ELT to save development costs, time and risk.Many organizations have recognized the benefits that can be gained from the employment of ELT. In spite of having already deployed warehouse solutions that use ETL, they have embarked upon a process of re-engineering their solutions using ELT through the use of effective tools.

Whilst data warehouse development traditionalists will undoubtedly pour scorn on the ELT approach, the clear and obvious benefits cannot afford to be ignored. 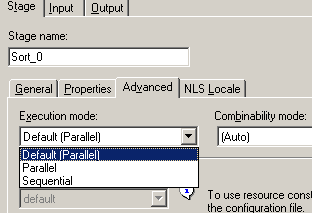 Like in many data related processes, sort plays an important part in etl transformations using Datastage. In fact sorted data is a pre-requisite for a number of stages like remove-duplicate, join, etc.. There are two ways in which you can sort your data in Datastage. One way is to do inline sorts in any stage that you want. For example if you want your data sorted before using it in your transformer you simply have to go to the input -> partitioning tab and check the ‘PERFORM SORT’ option. Even though sort is achievable in this way in some cases people specifically go for the sort stage due to the flexibility, power and variety of options it offers.
You can find the sort stage in the processing tab of the palettes section. In order to perform the sort you must provide the keys on which you want the sort performed. If you want to perform the sort sequentially in a parallel job then this must be specified by setting the sort stage to run in sequential mode rather than the parallel mode. This option can be set in the advanced tab of the sort stage as shown below. The choice of running the sort in sequential or parallel mode is entirely up to you based on your business requirement.